Bruce Peterson Lands At Naturipe As Its New President/CEO 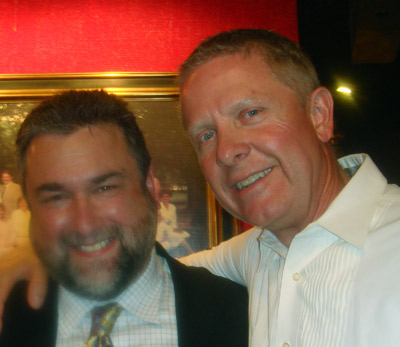 Bruce Peterson, who built Wal-Mart’s produce operation from scratch and — as we mentioned in Wal-Mart’s Bruce Peterson Resigns — left the retailer as the Senior Vice President and General Merchandise Manager of Perishables for Wal-Mart Stores, Inc., has accepted a position as President and Chief Executive Officer of Naturipe Farms LLC.

Since Bruce left Wal-Mart six months ago, he has cruised on his Harley, significantly improved his golf game and founded Peterson Insights, Inc., which, among other things, spearheaded an industry initiative on traceability, which we discussed here.

Now that the most asked personnel question in the industry — What will Bruce Peterson do next? — is answered, the unique structure of Naturipe, which is a partnership of U.S. co-operatives Michigan Blueberry Growers Association and Naturipe Berry Growers with the Chilean-owned Hortifrut, means that we have as many questions about the future as answers.

Bruce will take the place of John Shelford, an industry leader serving on the board of the United Fresh Produce Association as well as on the USDA Fruit and Vegetable Industry Advisory Committee. He has given many valuable presentations, including this one on Naturipe. Readers of the Pundit will also know John from his contributions to this page, including those here, here, here and here.

John, who has served as the President of Naturipe since the founding of the partnership in 2000, has graciously agreed to make himself available for a month following the change to insure a smooth transition for Naturipe’s growers, employees and customers, as well as to make Bruce’s life easier during the crucial first month.

A powerful force behind Naturipe is Victor Moller, President and Founder of Hortifrut. He launched the company a quarter century ago by deciding to ship Chilean raspberries to New York on straight consignment. He caught a good Christmas market and, from that, built a giant berry company.

Victor then had the vision to form a partnership with MBG and Naturipe to provide a year-round supply source for a full range of berries. Through the years, Victor has developed a reputation as possessing among the shrewdest minds in produce.

Victor served as a PMA board member at the same time that Bruce Peterson, as Chairman of what was then called the Retail Division of PMA, also served on the PMA Board — and that is how they made one another’s acquaintance.

We, of course, wish both Bruce and the ownership of Naturipe every good fortune. We confess that Jeff Garguilo’s difficulty in moving another co-op, Sunkist, to realize its full potential leaves us wondering if Bruce’s experience with this unusual company will be different.

It is always difficult to get the owners in this type of organization to let the CEO run the company and that is, without a doubt, the key to making this work.

Yet Bruce is in many ways the perfect man for this job. The popular image of such a powerful Wal-Mart executive is someone always giving orders, but it is important to remember that produce, even the whole perishables category, were just a small piece of Wal-Mart. When Bruce started, they were almost nothing.

While Bruce had to lead his produce and perishables team, he actually spent an awful lot of his time convincing other people, in other departments at Wal-Mart, that they ought to do what Bruce thought they should do. If he had not been successful at building this kind of consensus and support, Wal-Mart’s produce and perishables operation would not have had even a fraction of the success they have enjoyed.

So Bruce, who once built bridges between produce and packaged goods, now will build them between Chileans and Americans, between co-ops and private companies.

It is no secret that the owners of Naturipe Farms have had big plans. In no small part, the Naturipe brand was selected because it opened the door to products beyond berries.

Hortifrut is working on a public stock offering in Santiago, and the glamour of the Peterson name and the association with Wal-Mart can only boost the prospects for that effort and efforts in the future to raise additional capital. Of course, if it comes to that at Naturipe, well, Bruce has plenty of experience working for a publicly held company.

It can be humbling for a retailer to become a vendor. Somehow one’s jokes aren’t as funny and one’s phone calls are not returned as quickly.

Bruce, however, has a secret weapon in his background. He wasn’t always a retailer. He once owned his own wholesale produce company in Detroit. That is a background that prepares one for whatever life brings.

It is said that one reaps what one sows, and Bruce has spent a lifetime planting seeds of goodwill throughout the produce trade. We hope he harvests a bit, and we know he will plant more.

Best of luck to Bruce and to Naturipe. May their berries always be sweet.