As South African Grapefruit Enters The US Market, Who Will Step In To Build Year-Round Demand?

Andrew Southwood used to be the Vice President of Business Development at Fisher Capespan and then founded freshXpressions a organization that bills itself as providing “Management Solutions for Growth” — a sort of outsourced management concept to help companies with stretched management teams.

Now he sends word that a new player is entering the US grapefruit market:

On the 3rd of February, 2010, the Animal Plant and Health Inspection Service (USDA department) announced that it had approved 16 new magisterial districts in three South African provinces as ‘black spot free’. With this status, citrus produced in these areas is now permitted access to the USA, provided all protocols are correctly followed. 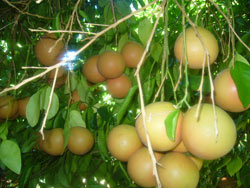 The new areas located in the Northern Cape, Orange Free State and North West Province are set to become good supply sources particularly for Star Ruby grapefruit, which does extremely well in the dry desert-like growing conditions. The quality of Star Ruby produced in the north west is well known, with the fruit showing excellent internal red color, high brix values and a thin skin. Add to this fruit that regularly falls into the size 30-36 count range, and it is not difficult to see why Fisher Capespan is excited at the prospect of adding South African grapefruit to its southern hemisphere citrus offering.

According to Marc Solomon (President of Fisher Capespan), volumes likely to be shipped to the USA this year will be moderate. The reasons for this are that many of the grapefruit orchards are still young and not in full production, plus growers in these regions do not have experience with the protocols required. “As the orchards mature and experience is gained in producing fruit for the USA, volumes could rise to over 500,000 cases (15kg) in the next five years” he said.

South African grapefruit will be available in the US from the end of May through to the end of July, at a time when domestically produced grapefruit is usually available in limited volumes. The first few arrivals are expected on containers and once the conventional vessels start arriving in mid June, will accompany the rest of the South African citrus offering.

For retailers particularly on the east coast of the US, this development is good news. With the growing strength of the summer citrus category, the addition of a high quality red grapefruit will further boost summer citrus profits!

Although South African navels and clementines have been on the market, this is the first entry for South African grapefruit. To be able to export to the United States, South African citrus-producing regions have to be certified as “black-spot free,” and earlier surveys found that the traditional growing areas in the eastern part of South Africa were not black-spot free.

The grapefruit industry has suffered in recent years. A fruit traditionally eaten at breakfast, it has not caught on with a younger generation that doesn’t sit down to eat breakfast. Then, as a double whammy, concern over drug interaction led to a decline in consumption among the older clientele, who were the core demographic.

Perhaps, however, the prospect of year-round supply could start to lead to reforms that might lead to a resurgence of demand.

There is no national grapefruit marketing effort, and one wonders if one couldn’t be set up along the lines of the watermelon and mango boards where product from many states and countries are all included.

Perhaps also there could be an outreach to McDonald’s. Today’s grapefruit varieties are delicious and require no sweetener — not like Grandma’s grapefruit, covered with sugar or honey — and McDonald’s has the youth audience and has shown a desire to at least offer healthy options. Why couldn’t every McDonald’s breakfast meal offering come with a choice of the deep-fried hash browns it currently offers or a lightly grilled half grapefruit? It is not as portable as a car-oriented culture might like, but an axiom of nutritionists is that one should pay attention to one’s food — not eat and read or eat and drive. This is in sync with the cultural trend to treat one’s food seriously. Perhaps McDonald’s will want to stake a claim in this space.

How about it McDonald’s? A pilot program in one city? You could offer a healthy option and, quite possibly, reinvigorate a whole industry. That is The Road to Sustainability on steroids… and think about the video: Grateful farmers in Florida saying you saved the business, grateful farmers in South Africa saying you created new markets to help a teeming country provide jobs and promote exports. If anyone in Oak Brook can share the dream, e-mail us here and we’ll get you in touch with everyone you need to make it happen.