Are Goji Berries The Next Health Craze? 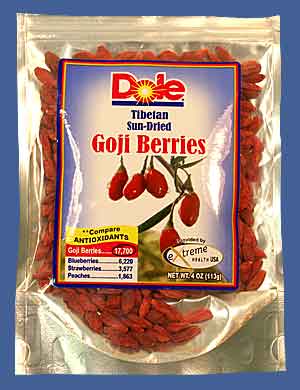 The Pundit is sitting here munching on some Dole brand Tibetan Sun-Dried Goji Berries. The label says they are “Provided by Extreme Health USA,” and the pitch is that one should “Compare Antioxidants.” The label shows an amount of antioxidants more than twice that of blueberries.

As the ever politique Karen Caplan from Frieda’s explains below, gojis are an “acquired taste,” but those looking for them are more interested in health and longevity than in flavor.

Goji berries are not enterable as a fresh product but both juice and dried versions are sold in the U.S. It is hard to get much good information on the item as it seems as most who write about it also want to sell you some, but the “health food” circuit just overflows with praise for the product:

Taking goji for health has been done for centuries in Asia and in recent years has been discovered by the western world. Goji berry extract has been found to boost energy, reverse the aging process, and facilitate weight loss. It is a great idea to purchase and consume goji because its medicinal and nutritional properties are beyond compare. The truth about goji is that it can improve your quality of life. Best of all, it can make you blissfully happy!

Blissful happiness is quite a claim for dried fruit, but Hollywood at least seems to be buying it. Some vendor bought a suite at the Emmy Awards and claims it got stars such as Paula Abdul and Ben Kingsley to “Enjoy Goji Juice.” You can see the photos here.

What really interested us was the fact that Dole had put its brand on the item. The Dole brand opens the door to generalized retail distribution.

We sent Pundit Investigator and Special Projects Editor, Mira Slott, out to learn more. Dole wasn’t saying much about its dried goji berry venture. “We are in the trial stages and not able to discuss the goji berry project in detail at this time,” according to spokesperson Marianne Duong. “We can not elaborate on the information you already know.” You can read details about the Dole Goji project here and a release from its supplier, Extreme Health USA right here.

Dole’s website does list gojis as a new product with the following description: “Dole all-natural Tibetan sun-dried goji berries are a convenient way to add an antioxidant superfood to your diet. Goji berries have over twice as many antioxidants as blueberries! Sourced in Tibet and Tibetan regions, Dole goji berries are grown in wild crafted conditions, beyond organic.”

With Dole not talking, we went out to see what else Mira could learn about this new phenom, and we spoke to various people involved in some way with goji:

Q: Can you describe your partnership with Dole Foods?

A: Dole’s Chairman and CEO, David Murdock, is dedicated to targeting serious health issues with natural products. He is very progressive and hands on. I understand that at one of the company board meetings, David Murdock, tasted the goji berries himself to make the determination personally and selected ours.

Q: Are their real differences between the varieties?

A: Yes. Dole did their homework when they called us. We import the berries directly from Tibet. They are all wild, natural, sun-dried, and not processed or artificially sweetened. We test for higher ORAC values (oxygen radical absorbance capacity scale), a measure of antioxidant levels, microbials and nutritional density. The Himalayan or Tibetan berry is noted for its purity, grown in soils free of pollutants or pesticides. At times it is mistaken for the Chinese Wolfberry, which can be loaded with pesticides and can be highly sulfured and irradiated.

We have a goji concentrate too. Two or three teaspoons extremely high in antioxidants gives you amazing energy like coffee without the jitters and curb appetite.

Q: Is Dole brand product out in the market?

A: Dole is in the pilot stages. It is negotiating with retailers now. Dole is approaching everyone. The goal is to put them right next to the bananas. We test-marketed our Extreme Health brand goji berries in 160 stores about 9 months ago, and 83 percent have reordered directly.

A: A long list of regional natural food stores and high end full grocery stores, such as Draeger’s Supermarket and Lunardi’s Market in California, as well as larger specialty chains like Trader Joe’s and Whole Foods and Wild Oats. 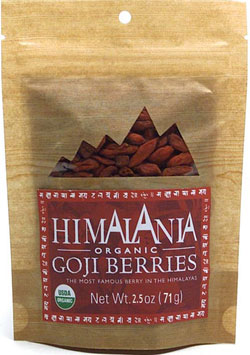 Q: How widespread is interest for goji berries?

A: The company has been distributing Himalania dry goji berries since January of this year. Fresh gojis are not legally permitted to enter the U.S. Melissa’s goji customers include stores such as Price Chopper, Wegman’s, Raley’s, Nash Finch, Kroger, AJ’s… a good representation around the country.

The trend started in natural food stores about two years ago. Gojis have legally been in the U.S. less than three years, first in medication application and more recently in dry berry form.

Q: What type of products do you offer?

A: Melissa’s offers three-ounce packages of Himalania organic goji berries, retailing between $5 and $6 each. We were pioneers in distributing gojis to mainstream supermarkets. Natural retailers started the campaign. The dried goji berry has a harder consistency than a raisin. I prefer it in granola or in mixed fruit form.

Q: How are sales? Is demand increasing?

A: Because of the consumer press attention to super fruits and vegetables and the media circulation about the powerful antioxidant properties of goji’s, Melissa’s has experienced an increased retail interest leading to wider mainstream distribution, especially since mid-summer.

Q: Do you carry goji berries?

A: We do gojis on special order. Goji berries are an acquired taste. Like the acai from the Amazon, it’s on the fringe of healthy foods. If it claims to cure cancer or be the fountain of youth, people don’t care what it tastes like. Gojis would fall into the category of the next pomegranate. I’d be surprised if mainstream consumers would eat dried gojis in snack form out of a bag. They work better disguised in drinks. Gojis are still hard to find outside of health/natural food stores, and only in selective mainstream supermarket stores.

Q: I understand Costco is bringing in dried goji berries. Are you the buyer?

A: I’m not the buyer, but I can tell you what we’re doing. We have just started selling dried goji berries. It’s new for us. At Costco, the dried grocery buyers handle that product line. It’s being bought regionally as opposed to what we do corporately. It’s not handled like a corporate buying program or private label. Gojis would be regionally bought like a chocolate or a jam or a salsa. I couldn’t tell you specific product attributes because the regional buyers are free to buy as they like. It is not a mainstream item by any means. What the future brings, you never know.

Q: Do you know if dried gojis will be cross merchandised with fresh produce?

A: There is an effort to buy some dried. It’s handled in dry grocery and offered in the dry aisles. It is not merchandised in the fresh produce department.

It will be interesting to see how the product sells. Pom Wonderful, which we dealt with here, brought a dead product back to life with medical research, product development and marketing.

The Pundit is a capitalist and believes that, generally speaking, people should be able to make their own decisions about what items to buy. So, with there being obvious demand, we are glad to see this product getting out there.

Here at the Pundit, though, we are often pitched products that claim to be the Fountain of Youth. When all the research is done, these promises don’t often pan out.

We tried to find good peer-reviewed double-blind studies indicating the product will help people, but can’t seem to dig anything up. Even Andrew Weil, M.D., generally perceived as a promoter of alternative and natural medicine, seems a little skeptical on his website:

Goji berries and the juice made from them seem to be the latest rage among those who think a single food can accomplish nutritional miracles. Goji berries are being promoted as the most nutritionally dense food on earth, packed with vitamins, minerals, and antioxidants. The health claims being made for them and their juice are wide-ranging: anti-aging effects; implied benefits in the prevention and treatment of cancer, diabetes, arthritis, digestive problems; and, of course, they’re being touted as a means of weight loss and weight control, always a sure-fire way to attract customers.

Although promoters mention ‘studies’ that supposedly support these effects, no specific scientific studies were cited on any of the several websites I visited to learn more about goji berries. In a search of peer-reviewed medical literature, I found no studies at all on goji berries.

I’ve heard similar health claims, many times before, for other products, none of which has proved over the years to be the great secret to good health and longevity. Goji juice is expensive — about $30 per half liter (18 ounces). If you follow recommendations to drink four ounces a day, a month’s supply will cost you about $200, a high price to pay for an unproven product.

In addition to my doubts about the unsupported health claims, I am prejudiced against the multi-level marketing through which goji juice and goji berries are sold — you can buy them only through distributors who make money not only through their own sales but those of the people they recruit. My advice? Save your money and bank on proven nutritional strategies to optimize your health.

The good thing is that with companies such as Dole and Costco in the business, the multi-level marketing and exorbitant pricing is on the way out. So that is a good thing.

The Pundit is about one ounce through the four-ounce bag and wondering if goji berries infused with organically grown pure cane sugar wouldn’t also be healthy?