We recently wrote about the Amazon and Whole Foods merger with a piece titled, Is Amazon.com’s Deep Dive Into Grocery And The Whole Foods Brand Worth $13.7 Billion? Any Significant Investment In Bricks And Mortar Would Torpedo Amazon.com’s Coveted PE Ratio.

Now Amazon has completed its acquisition of Whole Foods, and, showing itself to be an expert at manipulating the media, the company made an announcement that meant almost nothing but got the headlines it wanted:

From The Washington Post: The days of “Whole Paycheck” are over.

From AdvertisingAge: Amazon Has a Plan to Shed Whole Foods’ ‘Whole Paycheck’ Image

Yet the Amazon/Whole Foods release was both highly specific and oddly irrelevant. They did promise price cuts on a litany of items:

This was enough to send grocery stocks crashing as investors worried about a grocery price war. The Wall Street Journal titled its piece, Amazon Clobbers’ Grocers Stocks with Price Cuts at Whole Foods

Stocks for six large food retailers, including Kroger Co. and Wal-Mart Stores Inc., (WMT) lost around $12 billion in value after the announcement. Shares of grocery-store companies had already been battered since the deal was announced in June, and analysts say they expect grocery stocks could fall further.

But there are three things to note about amazon’s announcement:

First, it did not say it would lower prices on high-volume staples. It promised to lower prices on organic or “Whole Trade” products — these account for only a tiny fraction of the market.

Second, it didn’t say how large the price reductions will be.

Third, and most important, the release said zero about any intentions to accept overall lower margins. Whole Foods’ most recent gross margins have been around 34%. Its net profit margin was around 2.85%.

Which brings up the dirty little secret of retail pricing, much of which is about creating the perception of low prices rather than actually offering low prices. This manifests itself in different ways. Wal-Mart calls it the “Opening Price Point” — one alluring, hopefully unmatchable item in each category to draw consumers in and create a kind of “halo effect,” making consumers feel the whole category is priced well. But, to the extent the “Opening Price Point” item is priced based on Wal-Mart taking lower margin, it causes the prices of other items in the department to rise because it does not change Wal-Mart’s overall margin requirements.

All over the country, vendors of so-called “wet salads” sell potato salad, macaroni salad and coleslaw to retailers at a loss — but they make up the margin by charging more on smaller volume salads.

In an age in which the media is always being accused of presenting “fake news,” the gullible way that virtually the entire media just regurgitated the Amazon/Whole Foods release is incredibly disappointing.

And, in fact, when Amazon completed the takeover of Whole Foods, it counted on the generally lazy media to report what was easy to report — that on these few items, Whole Foods had substantial price reductions: 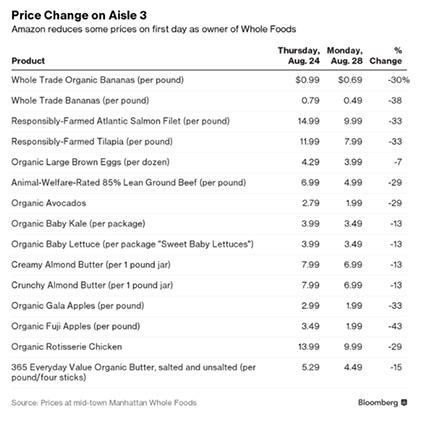 In other words, like dogs following their master, the media dutifully did the PR job of trumpeting the Whole Foods list of items it would cut prices on. But surely this is the most unimportant news in history. Who cares if a particular store lowers the price on a particular item? That is usually not news at all — that is what stores usually use in their weekly ads.

Surely the only thing that is relevant is whether Amazon has made a decision to accept lower gross margins on the overall store basket. If Amazon announced that Whole Foods will drop its retail gross margin to 15% instead of its current 34%, now that would be news!

But announcing a price cut on one item means nothing. Maybe Whole Foods would fund price cuts on Organic Gala Apples by increasing prices on Clementines. The failure to ask these questions and to just enthusiastically parrot an Amazon/Whole Foods press release is a disgrace for the media.

A few news outlets avoided the hype and pointed out the obvious truth:

Here is the money quote:

‘Amazon appears to be taking a page out of the old Wal-Mart playbook on the price action front that is, announcing a plethora of price actions that on the surface look deep, but in reality only reveal modest reductions,’ Gordon Haskett Research Advisors analyst Charles Grom wrote in a client note.

‘We will continue to monitor the situation going forward, but our initial checks suggest that Amazon’s bark may be greater than its bite,’ Grom wrote.

Whole Foods stores around the country on Monday cut prices on selected items by as much as 43 percent. The move, on the day Amazon closed its $13.7 billion acquisition of Whole Foods, was broadly cheered by shoppers.

But Grom said an analysis of prices on more than 100 products at a Whole Foods in Princeton, New Jersey, showed an average price decline of only 1.2 percent between Aug. 21 and Aug. 28th, dates that fell before and after the merger. Prices on about 78 percent of items were unchanged from the previous week, Grom said.

The price adjustments varied by category. Dairy and yogurt were down the most with a 5.6 percent decline, while dry grocery and baking items prices posted the biggest gain of 4.9 percent.

So, Annie’s Mac and Cheese more than doubles in price, and there is scarcely a mention. Whole Trade organic bananas drop 30%, and it is highlighted in thousands of media reports. Why? Because Amazon/Whole Foods sent a press release about one item, but the other item would require the media to actually do work to find out. That is just shameful.

Some have come up with elaborate theories on why Amazon won’t need to make money on groceries:

This echoes the same point grocers feared about Wal-Mart when it began its move into supercenters. After all, Wal-Mart was pairing its high margin general merchandise operation with a low margin food business. The goal was to capture customers more frequently and have them buy a toy or towel while picking up some frequently shopped items such as milk, bread and fresh produce.

But it turned out that the issue of whether companies need to “make money” on groceries is a bit beside the point.

First, food is such big retail category that it overwhelms everything. Very quickly, grocery became the majority of Wal-Mart’s business. It is hard to not make money on the majority of your business and make it up on the rest.

Second, the issue is really not whether Amazon needs to “make money” on Whole Foods — it is whether and if it is prepared to lose money on Whole Foods. The entire net margin for Whole Foods is about 2.85%, so, if Amazon wants, it can lower prices across the board by about 2.85% and break even.

Or to put it another way, if it lowers prices by 2.85%, it can just lose the interest and opportunity cost on its investment in buying Whole Foods.

Unless Amazon has a way to buy cheaper or reduce the operating costs of the Whole Foods stores, it cannot significantly lower prices without losing money.

Amazon announced other changes, notably that Whole Foods’ private label products will be available on Amazon.com.

Yet, of course, there was nothing stopping Whole Foods from putting its private label products for sale on Amazon.com before the merger. One can only surmise that the management of Whole Foods felt that offering an exclusive line of products in store was an important draw that outweighed any earnings to be gained by selling the products on Amazon.com. So, now, Whole Foods is taking a step that may help Amazon.com, but right up till the day before the acquisition, Whole Foods management thought it was not good for the stores.

So, post-acquisition, we can say a few things:

1)   The stock market loves Amazon, and Amazon’s executives figured that the market would swoon at its acquiring an aspirational name such as Whole Foods.  Amazon’s management was correct.

2)   Amazon’s management cleverly is using a compliant media to change Whole Foods “whole paycheck” image. They seem likely to have some success with this.

3)   The substantive benefits of an Amazon/Whole Foods combination remain unclear. That is true for consumers and for Amazon.com. The only certain winners are the Whole Foods shareholders who got to sell out while the selling was good.