Ahead Of The (New York) Times

Back when chemicals were the big food safety issue, Pundit sister publication, PRODUCE BUSINESS, ran a cover story on the issue, it wasn’t five months later that Time Magazine ran a similar story with a very similar cover. We did a little self-promotion with an ad that pointed out the value we delivered: 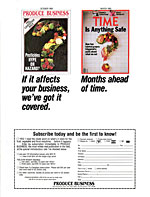 Well, 22 years later we are happy to report we haven’t lost our touch. For example, you could have read The New York Times of February 27, 2010, and found an article titled Decision Could Allow Anonymous Political Contributions By Business. The piece contains these lines:

Experts say the ruling, along with a pair of earlier Supreme Court cases, makes it possible for corporations and unions to donate anonymously to nonprofit civic leagues and trade associations. The groups can then use the money to finance the types of political advertisements that were at the heart of last month’s ruling, in Citizens United v. Federal Election Commission.

Or, you could have read the Perishable Pundit a month earlier when we wrote a piece titled, Supreme Court Ruling May Push Political Donations Toward Trade Associations, where we explained the impact of the Supreme Court ruling:

“…corporations desiring to engage in political speech will often elect to do so through a trade association, because trade associations would not have to disclose precisely who is paying for the advocacy.”

Used to be we were just “Ahead of Time.” Now we are “Ahead of the Times” — and the subscription rate is pretty good too!