AeroFarms, EcoSPACES and St. Phillip’s Academy Offer A Glimpse Of The Future
On The New Jersey Retail Tour
Of The New York Produce Show And Conference

One of the highlights of The New York Produce Show and Conference is the extensive tour schedule. No region can be fully understood from an expo center or hotel conference room, you have to get out and see the countryside.

Largest wholesale market in US. Located in the Bronx. Sells to smaller independent retailers and purveyors to restaurants plus many fill-ins and imported items to major chains. Also key point of first sale for many imported items. See write ups here, here and here.

Tour 3 — Manhattan Retailers
What is hot and happening in retail in NYC, many small format stores appealing to a range of income and ethnic groups.

We have always done an important New Jersey tour. For many shippers Manhattan stores are a foreign country, these stores often buy through distributors or off Hunts Point and so many shippers have no idea where or if their product is in Manhattan.

So when big shippers go visit media contacts in New York City, they send them to New Jersey to see the product. These big buyers in New Jersey are thus the choice of many when selecting a tour.

We always try and find unique and interesting and cutting edge things to add spice top the tours so, this year, those who sign up for the New Jersey retail tour also get a little treat. They will get exposed to cutting edge urban agriculture system that does not depend on sun or soil, it is a completely controlled  environment agriculture and it is being piloted as a direct source of supply for a school.

It was such an interesting concept we asked Pundit Investigator and Special Projects Manager Mira Slott to go visit the operation and find out more:

When Mira took her visit to St. Phillip’s Academy to get a preview of the tour she met up with the following people:

Attendees at The New York Produce Show will have the opportunity to find out why by signing up for this tour. 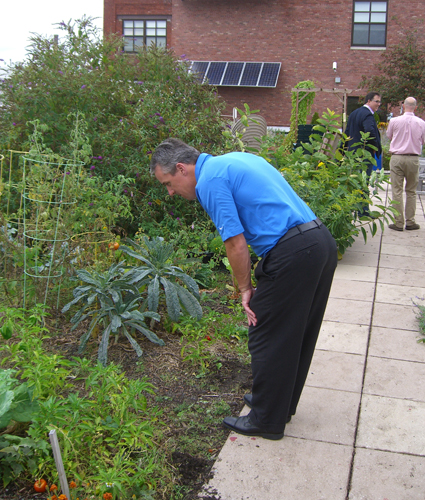 Paul Kneeland, vice president of produce and floral at Kings Supermarkets, calls the EcoSPACES program at St. Phillip’s Academy, “hyper local” in its embrace of organically connecting students to the produce industry.  Frank Mentesana, EcoSPACES director says it is “a lifecycle approach. The culture of the school has changed through a concerted, multi-faceted and multi-dimensional effort that intertwines academic learning within the classrooms to hands on farm to fork experiences for students.”

These endeavors include tending a roof top garden complete with composting, where designated plots contain ever-changing, grade-appropriate projects.  A revolutionary aeroponics in-door garden from AeroFarms sprouts fresh vegetables and herbs right in the cafeteria. This is where nutritious, health-based recipes are developed in an open kitchen layout specifically designed so that kids see all food being prepared from scratch. A creative salad bar highlights seasonal items the children have grown.

Students also immerse themselves in an impressive, fully equipped test kitchen thanks to generous corporate donations, while art projects use dyes from flowers picked in the garden. Math, science and history assignments also are tied in, and the lessons are carried over to parent workshops and community outreach. 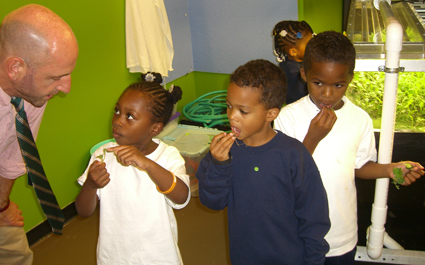 It is truly a full range program. Marc Oshima, chief marketing officer at AeroFarms, explains that the company gets involved in training teachers and kitchen staff as well as putting in the advanced aeroponic growing systems.

Mentesana continues, “In its third season, we moved the AeroFarms unit from the upper students’ science lab area into the cafeteria. We loved the idea of it being so close to the salad bar and to all the students every day.”

Kneeland shares an inspirational idea. “As an extension of the highly successful Salad Bar Donation Program, wouldn’t it be great to encourage people to donate AeroFarms growing systems to schools across the country.   One reason for the tour can be to promote this concept. When other schools can hear about this opportunity, they’ll think, ‘We don’t have the option to build a 6,000 square foot farm on our rooftop, but AeroFarms is a format that would easily accommodate our facility.’” AeroFarms is much more convenient and realistic. As long as it is sustainable, it really takes this idea of hyper local to the next level, Kneeland explains. 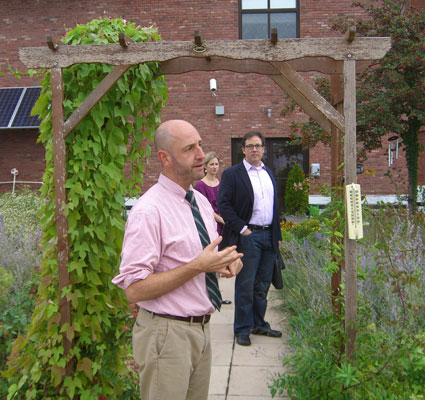 The EcoSPACES program has been an evolution, Mentesana emphasizes.“It faced some initial community resistance when we brought in the food service program,” he says. Why? Some parents wondered if a healthy meal plan would be limited to celery and taste like cardboard and create a revolt from the students. Nothing could be further from the truth. Children and teaches alike salivate in anticipation of meal times. “Adults are victims of not learning good eating habits when young. That is why our program is intentionally comprehensive; eating lunch together, learning about produce in the classrooms, growing it, cooking it, getting parents involved doing demos at school, etc.,” he explains.

The mechanics behind the program required buy in. “Administrators thought they would get bogged down. Teachers were asking, ‘how do we do the curriculum, can we hit the benchmarks?’” Mentesana continues. “It was just a matter of becoming more hands on to retain information better, and enthusiasm grew from there.”

Adds Oshima, “The AeroFarms system is flexible and modular, so it works in different spaces and heights and can be adjusted for airflow and light, which is ideal for schools.

At the same time, “It is critical to understand how AeroFarms fits into the big picture. It can’t stand by itself,” says Mentesana of the EcoSPACES concept. There was a plan, broken down into different phases.

“To start, we thought it most important that kids were eating well. At St. Phillip’s Academy, we have a mandatory program that 100 percent of kids eat here. We set food standards and values such as what types of fat, use of whole grains, eliminating processed foods, and cooking from scratch,” he continues.

The other big idea was to create a culture and conducive learning environment. This was the impetus for an open kitchen in the cafeteria so students could watch the cooking process and see kitchen staff chopping fresh vegetables, not microwaving, and not opening boxes of fried chicken fingers.

Round tables create a community feeling because it is easy for kids to interact.

Each child has a job responsibility during lunch time. Chairs are numbered to correlate with the jobs. If the student sits in chair #1, for example, he or she gets the silverware and sets the table.  “After we revamped the lunch program, we developed the edible garden rooftop and composting station. Signs on each table remind children about collecting items such as cantaloupe rinds to bring up to the garden for composting,” says Mentesana.

“Next we created a teaching kitchen with solar panels and then the AeroFarms system,” he continues. “Throughout this process, we are not forgetting physical activity. We have classes like introduction to yoga, and teachers and students manage recess in a more inclusive way.”

The AeroFarms garden gives students the opportunity to experiment, explains Oshima. Some of the children planted cilantro for the first time. They learned that germination takes longer than for leafy greens.

One time there was an electrical surge and some plants drooped, so they had to figure out the different possibilities of what to do, notes Mentesana.  “Teachers were saying, ‘we don’t have a green thumb,’ but they came around to the idea when not confined to classrooms.  In fact, beyond integrating all academic disciplines, teachers and administrators eat here in the cafeteria with the kids, which promotes staff and student interaction and is meaningful in showing collective support, he explains, adding, It helps that the food is delicious too.

Another layer of the program is the arts, learning knitting, for example, with yarns naturally dyed from marigolds picked from the rooftop garden. It becomes a medium for students to experience new tasks and learn about different cultures. One such program, Feast for Your Eyes, gets kids to draw what they eat based on what’s in season, and then it’s on the menu in the cafeteria.  As items are fresh and seasonal, it reinforces trying new flavors and new foods.  Another project involved kids reading about Afghanistan and learning the customs, then picking different herbs in the garden to flavor naan bread they made in the kitchen, and then sitting on the floor to eat their meal like the children in Afghanistan.

Students may do canning of cauliflower, which involves a history component, math proportions and measuring, and refrigeration and food safety science. “Teachers are more enthusiastic to get out of the classroom, and it fosters nice collaborations,” says Mentesana.

Parent/student workshops center on plant-based nutrition and preparing healthy food, and the importance of sitting at the table for meals as a family, according to Karen San Giacomo, Communications Director at St. Phillip’s Academy. “We have countless anecdotes of parents saying, ‘my kids are yelling at me if we’re not having fresh fruits and vegetables in the house.’ Soul Food Junkies was one workshop, where we showed a small video documentary and followed with cooking demos.”

What makes the school even more extraordinary, explains San Giacomo, is that the school is located on Central Avenue next to a correctional facility.  “Most students are on financial aid, or split the tuition 50 percent. This is one of the first years where we have a waiting list. Above all, we look to kids that are the neediest,” she says, adding, “March is our annual gala and auction and we receive strong community support.  The program starts with students but is much more far reaching.”

AeroFarms system is highly intriguing and raises many questions.

Paul Kneeland asks if the produce industry would support putting one in every school as they do supports salad bars. It is an interesting question. Yes, these type of growing operations will boost children’s interest in agriculture and maybe inspire children to try more items, but it is also true that this type of initiative does not directly produce additional business for the grower/shipper, some would see them as competitors.

Still the concept is exciting for schools and, perhaps, would have other applications. A restaurant or retail store could offer “hyper-local” produce. Dilapidated urban buildings could become urban farms and much more.

Of course financials have to be worked out and you can’t grow all products very easily. Still, you never know when the future will sneak up on you, so it is a good idea to look.

You can register for The New York Produce Show and Conference including all the tours right here.

If you just want to register for one of the tours or want to add a tour to your existing reservation let us know right here.

Here by the way is a little video news report we found highlighting the project: