Accolades In The Form Of A Painting

Earlier this year, the “Pundit” won an award for editorial integrity. It was, of course, thrilling that a panel of publishing and editorial experts would bestow such an award.

Then we received a giant package delivery and it, quite simply, just blew us away. It came from one of the industry’s true luminaries and it contained a giant painting with a very kind note attached:

The enclosed graced my walls at Standard Banana Co. — the Dole Food Company and, lastly, at the Duda Company. It always reminded me of one of the core factors in our business: The Wholesale Market.

This painting is hereby awarded to the “Pundit” for his leadership, his courage and most of all — his integrity!

Keeping this painting close by you will keep you close to our beloved produce industry.

Think of it as Hunts Point in the middle of the night, loading and unloading produce.

Hang it with reverence.

The painting is actually an original by Raymond Howell, an artist so prominent that Stanford University held a 40-Year Retrospective on his work. 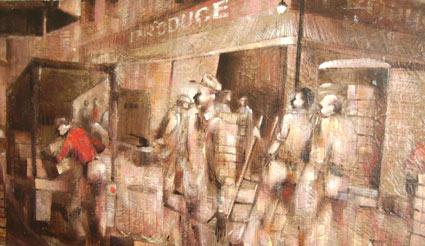 The Oakland Museum of California also has featured his work and described it this way:

Recent Works by Raymond Howell, an exhibition of approximately 15 works by the Oakland painter and printmaker, includes works in oil, mixed media and silkscreen include street scenes and portraits of jazz musicians and African American children.

Raymond Howell’s paintings are based in realism, with eclectic influences of surrealism and impressionism. In recent years he has experimented with collage, mural painting and printmaking and has created series of works on such subject matter as jazz musicians who were innovators in their art form. An artist whose work focuses on African Americans, Howell describes himself as a role model for artists who have traditionally been reluctant to paint African American subjects.

Howell has been a longtime fixture in the Bay Area art scene. In the mid-1960s he opened Art Associates West, a gallery and art school in San Francisco’s Haight-Ashbury district, which operated for nearly a decade. Howell’s 1965 painting “The Brown Family” was shown at the opening of the Oakland Museum, and was later purchased for the museum collection. His work has been exhibited widely throughout the United States, and in 1999 Stanford University presented a 40-year retrospective of his paintings.

But, of course, we would never dream of selling it. We see it as a baton being passed from a veteran and our only hope is to be worthy of having been chosen to receive it.

It was nice to be recognized by publishing experts, but the only judgment that is really meaningful is that of those in the business. So for Bruce to send us this beautiful painting, rich with history, is worth a hundred publishing prizes. To receive a note like that makes a lot of late nights worth every minute. We thank Bruce very, very much.