A TRIPLE CROWN OF AWARDS:
For Commentary Well-Thought;
Events Well-Presented;
A Life Well-Lived…
All In Service To An Industry Well-Loved

We have been enormously gratified over the years to have won a number of important recognitions and awards. Our motto since Day One has been to Initiate Industry Improvement, and so when we get third-party testimony that we have done that it means a lot.

We remember being called up at United Fresh way back in 1990 when we were honored to be awarded the first ever “Man of the Year” Award given by that long-established association. And over the years, we’ve won over 100 editorial awards including a very special one we wrote about in a piece titled, Prevor Wins An Award, But Industry Gets The Prize.

Then this week, we received news of a Triple Crown of awards:

First, the Pulitzer Prize of the Business Press is called the Jesse H. Neal Award, and we won first place this year for Editorial, Commentary and Opinion. The Perishable Pundit was honored this year, following last year’s award for best columns in Pundit sister publication, PRODUCE BUSINESS.

It was the 61st annual presentation of the awards, and the presenting body had this to say:

‘And for Best Commentary, the Neal goes to… Jim Prevor’s Perishable Pundit! Accepting for Jim Prevor is Mira Slott, Special Projects Editor. This is the second year in a row that Phoenix Media has won the Neal for what judges call ‘clear, hard-hitting, but fair commentary. These are excellent, well-done and well-researched columns. It’s impressive that Jim is willing to take on some big players in the produce industry.’

Of course, what they call “taking on” we call helping analyze the industry and situation so we can all do a better job and become more successful.

Second, our great project of 2014 was the launch of The London Produce Show and Conference, and how exciting we are that just before the second edition is to be held the first week of June, we were selected as the Number One International Event in the prestigious FAME Awards, presented by FOLIO: the magazine for magazine management. Here is what the judges said: 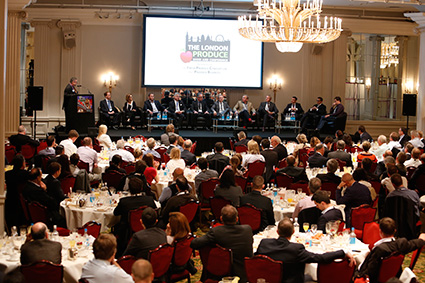 PRODUCE BUSINESS is a leading American magazine for the fresh produce industry. Although the publication has a notable presence in the U.K., there are other British and European publications in its competitive set. Still, there were no large-scale events in the U.K. to serve the trade. So the brand decided to appropriate what it does with events in the U.S.  across the pond.

The brand believed that by doing a substantial trade show, conference and networking event in the U.K., it would help build closer relationships with the British and European trade and help increase brand awareness. So the idea became spinning its New York Produce Show and Conference into London.

A show of this magnitude in this market was new to the London trade. It included 140 exhibitors and a program packed with thought leaders from around the world.

The results were instant and impressive. A study done of exhibitors at the show by England Marketing indicated that:

Circulation of the magazine and its digital products in the U.K. more than doubled and industry demand led to both the establishment of a substantial custom publishing unit and launch of a U.K.-specific digital publication early in 2015.

While the U.K. is smaller than the U.S.’, the London event, with over 1,100 attendees, was the largest of its kind. And in 2015 it will only get bigger, with attendance projections set 50 percent higher than in 2014.

Of course a lot of this is inside baseball — or maybe cricket! The real win was in creating a new opportunity for engagement in the great iconic city of London. From across Britain, around Europe and the Mideast and around the world, thought leaders, key traders, prominent buyers, all gathered to learn, to build and reinforce relationships and to do business in this great standard-setting nation. A region of the world that truly was an island suddenly became a center of attention as the global produce trade pivoted to London.

The London Produce Show and Conference is presented by The Fresh Produce Consortium and PRODUCE BUSINESS and has grown under the tutelage of Tommy Leighton and an impressive and hard-working UK team including Emma Grant, Linda Bloomfield, Hannah Gorvin, George Beach, Natalie Pavich, Gill McShane, Kathy Hammond and Liz O’Keefe, backed up by a substantial American team. Congratulations are due to all.

Finally, we have been traveling in Australia, France and London, but we are heading back to the United States as we have received word that the Eastern Produce Council has deemed fit to honor this Pundit with a Lifetime Achievement Award at its gala this weekend.

Under any circumstances, such an award is humbling. But to win it from an association the Pundit’s family has been a member of since its founding, and to be so recognized in an industry where the Pundit’s father, Michael Prevor, grandfather, Harry Prevor, and great-grandfather Jacob Prevor, all toiled is of special meaning.

How does one possibly say thank you?

This year, at PMA we will be celebrating the 30th anniversary of the launch of PRODUCE BUSINESS magazine. As we look at these special recognitions, we realize that though it is gratifying to receive awards and recognitions, even more important is that the compendium of these awards stands as testimony that we are fulfilling that promise we made 30 years ago: To Initiate Industry Improvement.

One never knows, but we try to conduct ourselves in a way that we hope our father, grandfather and great-grandfather might be looking down and would schep a little naches at the things we’ve done and how we have lived.

If you want more information on the Eastern Produce Council dinner dance, let them know here.

If you would like to get a free subscription to the Perishable Pundit, let us know here.