We have written before about PMA’s efforts to find the right model for cooperation with the trade in Australia and New Zealand:

We’ve also interviewed some of the most prominent people and organizations in the Australian industry:

Bryan Silbermann, President and CEO of the Produce Marketing Association, has had many “children” in his professional career — the Produce for Better Health Foundation, the Center for Produce Safety — all these he can rightfully claim as part of his legacy. Yet we suspect that for this immigrant to America, none of his professional children are as meaningful as the newest, the birth of an affiliate in Australia and New Zealand.

The new affiliate just finished up its Fresh Connections event. It included an incredible program, a small trade show and was made possible by many sponsors.

It wouldn’t have worked except it was fully embraced by the Australian and New Zealand produce community, including a powerhouse board of directors:

Board of PMA Australia-New Zealand:

We asked PMA how it viewed the event and they described it this way:

PMA Australia-New Zealand’s Fresh Connections 2010 held in Melbourne this past week marked a tipping point in the association’s global development. As the first conference arranged by PMA’s new affiliate based here in Australia, the conference drew an amazing 700+ registrants, a near-tripling from last year. A similar increase in the number of exhibitors saw more than 60 companies show their products and services to registrants who ranged from the region’s leading retailers and wholesalers, as well as a dozen leading retail buyers from South East Asian countries.”

The conference included an all day tour of leading retailers in Melbourne (Woolworths, Costco, Coles, Thomas Dux among others). It was also notable for the inclusion on the education program of the top executives from these companies as well as McDonald’s Australia and Tesco Asia. Next year’s conference and expo is scheduled for the Gold Coast in Queensland, Australia, from June 8-10, 2011.

Sometimes a picture tells a thousand words and if you look at the photos we’ve included with this piece you see some key points about the conference. 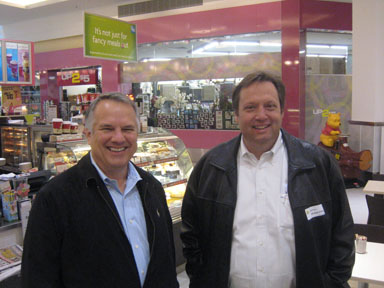 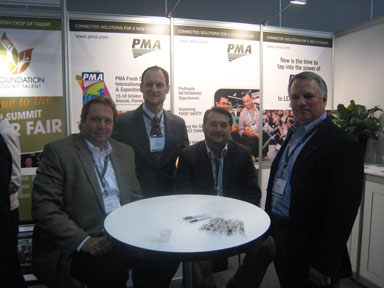 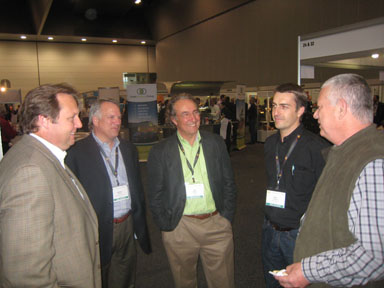 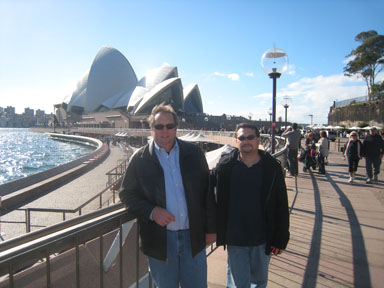 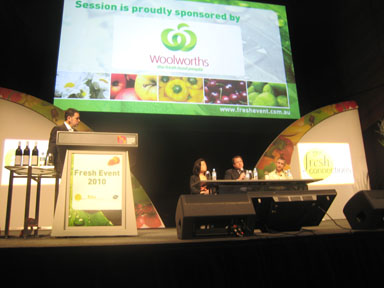 The one showing the panel moderated by Kerry Wells of MG Marketing is important as it indicates the first time that representatives from companies as diverse as McDonalds, Tesco and Woolworths have spoken to an industry gathering in the region. This is reflective of the unique vertically integrated value proposition PMA brings to Australasia, including bringing together buyers and sellers across the supply chain in discussions on ways to improve the way the industry goes to market. 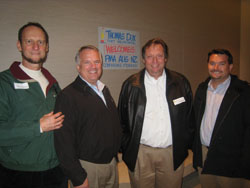 The photo showing Bryan, Bill, Mike and Tim in front of a welcome sign from Thomas Dux (a small-scale greengrocer subsidiary of Woolworths) illustrates the fact that retailers have jumped in to provide support for PMA A-NZ, giving of their time, executive resources, and financial support.

In fact, the Australia event received more retail support than do most American events.

Bryan Silbermann delivered the keynote and caught the historic significance of the event:

Sometimes in our fast paced lives we forget to pause and realize that we’ve turned an important page in our narrative. I believe this is one of those occasions. So today, let’s slow down and take the next half hour to consider … This isn’t just another Fresh Connections. And this time I don’t intend to share many facts and figures that drive produce marketing.

Instead, as I considered what to say, it occurred to me that in a very real sense, today is very much a commencement ceremony. A commencement is an important milestone, a turning point. To paraphrase the American poet Robert Frost: “Some follow a path well traveled and comfortable. Others take the road less traveled.”

I believe we have chosen the latter path. That’s a good thing because that is where we learn, where we grow. That’s the nature of our industry, and I believe it’s what makes us different from so many other business sectors.

Just think about what today represents. While this is not the first Fresh Connections we’ve held here in Australia, this gathering is fundamentally different from those in the past. It’s different because it is the first conference and show organized by your new PMA Australia-New Zealand leadership. So this is really a turning point for the creation of your community, a community spanning the whole supply chain from seed to store to dining table. Your leaders have taken the lessons from PMA’s experience in North America and around the world and have set sail on a course aimed at bringing together an entire industry…

There are a lot of people who made it happen … In addition to the current board, Rob Robson, CEO of OneHarvest and the first person to ever serve on PMA’s executive committee, and Michael Batycki, who was Senior Business Manager, Fresh Produce at Woolworths when much of this was coming together, were instrumental. John Baker, PMA’s representative in Australia, has fought the good fight for years and Michael Worthington is the new Executive Manager of PMA Australia-New Zealand.

We also would raise a glass to Nancy Tucker, Vice President For Global Business Development at PMA. Nancy doesn’t grab many headlines but for longer than we can remember, Nancy has quietly and methodically done yeoman’s work. She promoted international expansion for PMA before international expansion was cool. Before anyone talked of affiliates or country councils, she was like a busy bee visiting Australia and New Zealand, pollinating good relations between the industry and PMA. Even if her style isn’t to demand credit … well, attention must be paid.

Rob Robson’s daughter Felicity — a winner of the 2010 Produce Business 40-under-Forty Award — serves on the Board of PMA Australia-New Zealand, but Rob was present at the creation of the move of PMA to associate with Australia and New Zealand. Felicity relayed some of her father’s thoughts to us:

Every year in Australia, the hundreds of players in our great mining industry gather for a conference called ‘The Diggers & Dealers Conference’. If your company is touched in any way by the mining industry, this is not to be missed.

Finally — the Australian and NZ produce industry has its own ‘Diggers and Dealers’!!

Our produce industry was forever changed by the attendees at the recent PMA Australian & New Zealand Fresh Summit Conference in Melbourne.

Over 700 produce players gathered, listened, learned, communicated and celebrated in what was a milestone event for the industry.

Australians are great networkers but, to date, our produce industry has suffered the lack of a common organized venue for this to happen.

The PMA-ANZ team delivered with a list of topical speakers and plenary sessions that provided discussion-provoking opportunities for real take-home value and business-creating networking.

This event has set the scenario for our country, at last, to have a peak industry body servicing the whole supply chain with real opportunity for business growth.

Fresh Connections was an outstanding success in my (little biased!) opinion. There were many highlights … here are just a few: We had in excess of 700 delegates, last year it was 253. We had delegates this year from South East Asia and the Middle East, and of course New Zealand and the USA, so it was an international event in the truest sense. We had 53 exhibitors this year in our trade hall compared to 22 last year.

At the welcoming Reception I said to the delegates present that over the next two days they were going to be at ‘Retail Central’, we had 8 speakers from leading retailers — Woolworths, Coles, IGA FRESH, Costco, Franklins, Harris Farm Markets, Tesco Asia — and from the retail foodservice sector, McDonalds. This line up of speakers had never been brought together in the history of produce in Australasia!

We hosted our first ever Retail Tour, which sold out! Included on the tour were leading supermarkets and independents in close proximity to the Melbourne CBD.

This event represented the first real opportunity in Australasia for all sectors of the supply chain to come together to learn, to engage and to trade.

PMA ANZ is a great example that the PMA Global Strategy is right on track and in line with what members want.

As with all beginnings, the future is unclear. Starting an organization is easier than sustaining it and, without a doubt, there will be challenges ahead. The opportunity, though, is vast. Can this little event grow to be a major multinational event, attracting the trade from across Asian and Oceania? Is Australia/New Zealand unique or can the model be successfully replicated across the globe?

Will having an affiliate relationship increase cooperation between the trade in the US and Australia/New Zealand or will the existence of strong organizations and conferences in each market lead people to stay home?

Giumarra’s Tim Riley was part of the US delegation and he passed on his thoughts:

The Giumarra Companies have done quiet a bit of business in New Zealand and Australia prior to this conference, so I was not unfamiliar with the region or the trade. That said, from a personal side it was refreshing to visit with growers and suppliers of all types and sizes. I was very impressed with the participation level of PMA’s Australia/NZ Board of Directors. Perhaps because of the total population size, each one is so close to the whole industry.

The industry relationships reminded me of our US industry 10 or so years ago, very relationship-oriented, and I sensed respect from each other on both sides of the transaction.

I truly enjoyed this trip. It is not often I can get an opportunity to be exposed to things outside the realm of our own business and, in doing so, learn so much.

I was simply overwhelmed on the opportunities for the future. As you know, I travelled on behalf of PMA, traveling in an industry and association role. However I still walked away with many new friends and business opportunities.

I truly see New Zealand, Australia, and the greater Pan Asian region as a totally new opportunity. PMA ANZ (as it is being called), just might add more value to our members in the USA and other countries than anyone imagined — well, at least more than I imagined!

It gave me a good feeling seeing PMA’s Global Strategy coming to fruition, and more important seeing the strategy actually adding value to the industry on both continents.

Not to mention, one of the most beautiful places I have ever visited.

So it is … and also beautiful are the opportunities for trade, commerce, education and friendship created by this blossoming. We are all richer because some pioneers made it happen. We are all in their debt.