A Look At Tesco’s Stores

We’ve been dealing with Tesco’s arrival in America for some time. Now we have some additional information. Here is what the stores will look like: 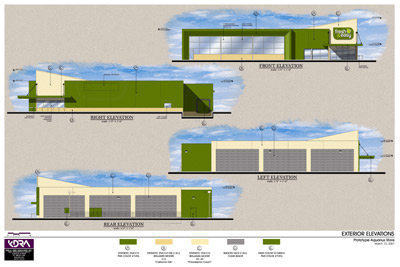 Here is a map of where the initial stores will be in the Phoenix area: 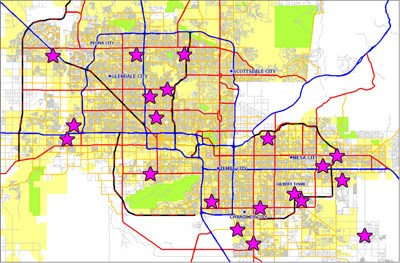 Here is a list of the Phoenix area locations:

The stores look attractive, though one wonders if all that glass in the hot Phoenix sun is really the green thing to do?

Fresh & Easy is trying to burnish its green credentials though. It made an announcement:

EL SEGUNDO, Calif., May 22 Fresh & Easy Neighborhood Market today announced the arrival of the first in its fleet of distribution trailers that, like its store locations, will showcase the company’s goal to be a good steward of the environment.

“Fresh & Easy Neighborhood Market is in a unique position to deliver fresh, affordable, high quality food into the neighborhoods in which we operate and to do so safely and in the best interest of the environment,” said Tim Mason, Fresh & Easy Neighborhood Market CEO. “As a new company in the U.S., we have had the opportunity to work with leaders in ‘green technology’ to create, from the ground up, an entire fleet of aerodynamic, fuel efficient and neighborhood-conscious trailers in our first round of manufacturing.”

A highlight of the trailer includes a hybrid refrigeration vector unit which minimizes the amount of diesel used to safely cool and transport store products. All Fresh & Easy trailers will include automatic refrigeration shut-off when optimum temperature is reached inside the cooling chamber as well as a complete engine shut-off once parked at the stores. Electrical stand-by technology will also minimize the impact on the environment by using no diesel fuel to run refrigeration units on the trailers while parked at the distribution center.

In addition to maximizing fuel efficiency and reducing their CO2 footprint, the trailers are designed to reduce audible noise by 66 percent. For example, Fresh & Easy Neighborhood Market trailers will contain roll up doors rather than lift gate trailers to minimize noise. Drivers will also be committed to a zero-noise policy in the truck cabs while unloading at stores.

The trailers are bright white and contain the company’s green Fresh & Easy logo. The website address (http://www.freshandeasy.com) lies across the back of each trailer.

Tesco is the UK’s largest retailer and one of the world’s leading international retailers, operating over 2,800 stores across 12 countries and employing over 370,000 people.

Tesco has grown from a market stall, set up by Jack Cohen in 1919. The name Tesco first appeared above a shop in London in 1929. There have been several phases of growth for Tesco and during the 1990s Tesco was successful in the UK by investing for customers and pioneering many new innovations. For example, the company launched the Clubcard loyalty scheme and Tesco.com, now the world’s leading Internet grocery store. In 1995 Tesco started to expand overseas and now operates in Ireland, the Czech Republic, Hungary, Poland, Slovakia, Turkey, China, Japan, Malaysia, South Korea and Thailand. Last month the first Tesco-branded store opened in China.

Tesco’s success is due in part to delivering a consistently strong customer offering on every visit and every transaction and by focusing on the company’s core purpose: to create value for customers to earn their lifetime loyalty.

Some of this is just the advantage that comes from being able to buy everything new and modern. But some of it is the product of a lot of hard work, thought and investment.

Lifetime loyalty is an ambitious goal but this project is nothing if not ambitious. One thing you have to say about the executive team, they are willing to take a risk.