A Local Dilemma: What’s A Farmer To Do When Supermarkets Come Knocking?

A hat tip to John Vena, President of John Vena Inc. and board member of the Philadelphia Wholesale Produce Market, for sending along a piece about locally grown produce in the Philadelphia area: Picking Markets: Some Local Farmers Discover Hidden Costs of Selling Wholesale:

You’re a produce farmer near Philadelphia. You don’t have Nebraska-size land, so instead of making money on high volume, you grow enough tomatoes, sweet corn, or apples to sell at your own farm store, or to swap with other local farmers who, like you, also run a retail shop.

Then supermarkets come to your door. The same ones that, for years, had stopped buying local produce because they simply stocked whatever their distributors sent from faraway warehouses. Now, they say, their customers want local. They offer to buy your crops in bulk and sell them with a ‘local’ label, alongside the rest.

Easy money, you might think. A way, even, to unload extra produce at peak harvest that otherwise might have gone rotten. But what may seem like an alluring opportunity is, in reality, a double-edged sword, say some growers with farm stands popular in their communities, who have come to realize that they are paying a hidden price for even modest deals with deep-pocketed supermarkets.

One Chester County farmer, Pete Flynn, eliminated his wholesale business entirely this year. His own produce was selling at a nearby Wegmans, under his farm’s name, but at prices below what he was charging in his own little store.

The well-heeled customers driving into his Westtown Township farm market in Land Rovers and BMWs asked time and again: ‘Why should I buy here when I see your stuff a few miles away for less?’

Flynn, who works 200 acres for his Pete’s Produce Farm, sized up supermarket deals this way: ‘They’re really good for the local farmers who don’t retail in their market.’

His business is not the only one wrestling with the costs and benefits of the growing interest in local produce among supermarket chains.

Linvilla Orchards in Delaware County has business relationships with a few supermarkets, but it is wary of the industry’s penchant for ‘loss-leading,’ in which markets sell certain highly marketable items at prices lower than what they pay wholesale. They take a loss on apples but make up for it by attracting customers who’ll buy other stuff, too, once they come through the door.

‘That’s not great,’ said Ron Ferber, senior manager of the 110-acre Linvilla farm and retail store in Media, which is wholesaling more this year to Giant supermarkets.

Loss-leading is always in the back of a farmer’s mind: ‘It’s certainly a strong consideration. . . . We’re not excited about that,’ Ferber said.

The issue is simple: Farmers who can only grow a limited crop can maximize their income by selling direct to the consumer. This is what farmers’ markets, farm stands, CSA’s, U-Picks, etc., are all about.

For large farms, even large local farms, such efforts are typically inconsequential; they also may not even be particularly profitable. They are very profitable if one doesn’t count the cost of farm family labor — but larger farms can absorb all the labor a family can make available. If one has to go out and hire people to manage and staff these operations, their profitability quickly diminishes.

This article doesn’t articulate it, but it is really addressing the next notch up from small local farms that can sell all they can at a farm stand. After all, since a supermarket is likely to pay less than a consumer, the only farmers that would be interested in selling to supermarkets would be those that were capable of producing more than they can sell direct. 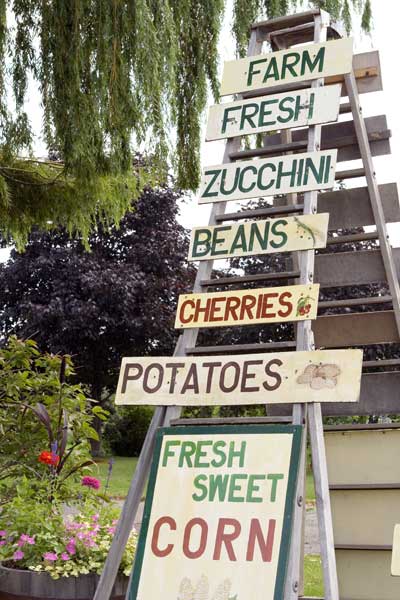 How can a small farm grow beyond its direct-to-consumer sales?

Not surprisingly this article points out a potential growing pain in expanding production — those new supermarket customers operate in competition with the farmer’s own retail operations.

The farm could sell to supermarkets under a different label, but it is not clear that would make much difference as the local trade would surely know who the producer is.

Dave Corsi, Vice President of Produce and Floral for Wegmans, is quoted in the article as saying that the whole thing is really a non-issue:

Flynn still needs to be able to charge premium prices for his corn, tomatoes, zucchini, squash, and beans, because 90 percent of his income comes from retail sales at his own store.

When he first began supplying Wegmans in nearby Downingtown about six years ago, business was strong all around. Even with the competition, his farm stand’s business was holding up well.

But sales fell 20 percent between 2008 and 2009 and have been flat ever since, thanks to the poor economy. It’s more important than ever to keep retail margins healthy. That means saying no to supermarkets.

For several decades, Wegmans has made an effort to stock fresh-picked produce because it’s a customer draw and helps support farmers in the communities where it has stores. Despite its sometimes-aggressive pricing, the Rochester, N.Y., chain has not run into trouble keeping up a steady supply, said Dave Corsi, vice president of produce and floral.

‘We’ve been operating this program for over 25 years,’ Corsi said, ‘and we’ve had over 500 growers partnering with us for a long period of time now, and we haven’t found it challenging for too many growers.’

At Linvilla Orchards, one thing that makes supermarket wholesaling attractive is that it provides a ready market for higher-than-expected yields — and on balance, that seems to be more of a good thing than a bad one.

We tend to side with Dave on this one. Farmers with extra crop — crop beyond what they can sell direct to consumers — still need an outlet. What else will they do with this produce?

They could sell it to a terminal market such as where John Vena works and figure it will be mostly sold to urban retailers far from the rural area of the farmstead. They could work with independent restaurants and get white tablecloth chefs to specify their product. But, if the volume starts to get large, the product has to find a home and that will mean selling through  supermarkets whether the supermarkets buy directly or through wholesalers.

In the end, the answer probably has to be that something in the experience of the farm stand, has to make people love it enough to not worry about the prices. When one shops at a farm stand one can meet the farmer or his family. One can see the produce growing and being harvested. One can watch and smell as the produce is being turned into cornbread and ice cream. One shops under pictures of great-grandpa hoeing the fields and the kids climb on an old tractor. The farmer’s niece samples the melon that she knows is just perfect. None of this is in a local supermarket.

One suspects that those farm stand growers who are hearing from their customers that the product is the same down the street just aren’t doing all they can to make the farm stand experience truly special.