A Call For An Industrywide Sustainability And Social
Responsibility Initiative

Our piece, Michael Pollan’s Sustainability Arguments Unsustainable In Context Of Economics, led to an important letter from Tim York, President of Markon Cooperative.

In this letter, Tim proposes nothing less than a new industry initiative. He warns us that if we do not work together to create industry standards for sustainability, buyers will wind up imposing numerous separate standards on producers:

I read with interest your recent piece on sustainability and appreciate the opportunity to share some thoughts on the challenges our industry faces.

Sustainability — which some define as balancing the needs of society, the environment and economics — is a trend with traction. When Markon thinks about it, we consider not only the evolving demands of our customers (today and into the future), but our responsibility for economic stewardship. If the produce industry dismisses or even moves too slowly toward adequately addressing sustainability, it will do so at its own peril — exposing vulnerabilities in our social policies (e.g. labor), the environment (e.g. water usage) and economic viability.

As consumer awareness about sustainability — with all its various definitions — has increased, food retailers and foodservice buyers have begun to develop sustainability programs. If our experience with food safety is any indication, grower-shippers will at first be asked to describe their activities in specific areas (for example, related to hiring and labor policies, pesticide use, water use, etc.) then eventually be asked to implement a patch-work of programs as additional buyers jump into the fray. Some of these programs will be based on that buyer’s unique definition of sustainability, some based on a competitive differentiation strategy, and others on even shakier ground.

If we let this phenomenon play out on its own, we are likely to see a proliferation of standards rivaling what we saw in food safety — arguably, with even less efficacy in accomplishing the stated goals. Dueling standards for sustainability in the buyer community isn’t sustainable — by any definition of the word — and may do nothing to advance the industry.

There is an alternative, and last year’s progress in food safety provides a model. We saw the collective industry work together, perhaps as never before, and create a common standard for a sound food safety program and independent verification, the California Leafy Greens Marketing Agreement.

Inspired by that collective action, we believe a meaningful sustainability program must include specific, measurable and verifiable criteria. True, the task of developing systems to credibly define, measure and monitor sustainability may be too large for most individual foodservice and retail companies. A more practical strategy lies with one or more of the major trade groups investing resources in the development of basic industry metrics. Such metrics would enable us to wring out inefficiencies across the supply chain and meet meaningful goals in sustainability while still affording companies the opportunity to create competitive advantage with “green” products and services.

Our Buyer’s Coalition, in cooperation with the Food Safety Leadership Council participants, and partnership with grower-shipper companies, may be an alternative approach. However, absent a uniting crisis like the one we faced last fall, we may lack the impetus to join forces and set aside our perceived competitive advantages.

Absent some cooperative effort, individual buyers (including Markon), third-party auditors, and others currently working on sustainability will impose their demands on the produce industry. Moreover, we can imagine a scenario in which food safety and sustainability are treated as discrete initiatives when in fact they should be viewed holistically — as complementary steps toward a healthier industry.

Maybe it’s wishful thinking, but I’d rather see us collectively take the initiative now, while it’s still possible to create sustainability metrics that dovetail with food safety best practices — and together move the industry forward ahead of consumer or regulatory scrutiny.

Not only are we already seeing pressure from trade buyers — both foreign and domestic — such as Tesco, Costco, Whole Foods and Wal-Mart — in this arena, but we are also seeing — as in the Florida tomato industry as we discussed both here and here — how interest groups can use consumer concern on these issues to affect trade practices.

The Pundit gave a presentation at PMA in Houston on this issue, focusing on preliminary results of some research we are conducting on the issue in both the U.K. and North America. In addition, as part of the faculty of the United Fresh/Cornell Executive Development Program, we are going to be looking at ways executives can begin to address these issues strategically.

In doing so, we are echoing what business leaders all over the world are pointing out:

We thought we could sit in Bentonville, take care of customers, take care of associates — and the world would leave us alone. It doesn’t work that way any more.

When Richard Yudin of Fyffes Tropical Produce wrote us, he asked a question: Why Don’t American Retailers Just Standardize On EurepGAP?

We answered, in part, by pointing out that EurepGAP, now GlobalGAP went well beyond food safety into, what for Americans, was unknown territory:

Chile set up a program modeled on EurepGAP, called ChileGAP. Now, theoretically, the US could set up a similar program. But look at what ChileGAP encompasses: 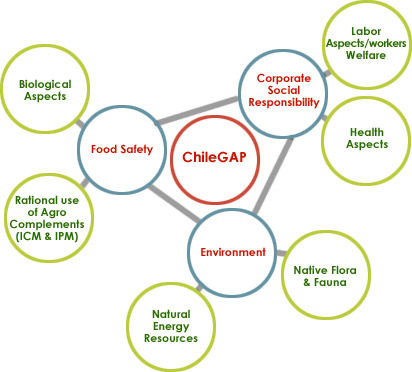 There is substantial discord in the U.S. on what is an appropriate food safety standard, and there is zero consensus on things such as “Labor Aspects/Workers’ Welfare”, “Corporate Social Responsibility” and “Natural Energy Resources.”

To an American, it all sounds like a bunch of meddling in affairs that are properly left to individual companies to negotiate on their own. And there’s a deep suspicion that EurepGAP is a way to sneakily impose European perspectives of social welfare on unsuspecting and unwilling Americans.

A company such as Fyffes — indeed most producers — would like one single standard, one single audit, which would make their product acceptable to everyone.

But in the absence of a universal consensus on these matters, and a willingness by retailers to forgo the possibility of higher standards, standardization on GlobalGAP or anything else seems far, far, in the future.

Yet it has become clear that American society has become sufficiently affluent that merely maximizing Gross Domestic Product is not going to be sufficient.

Look at an issue like energy. Despite $100-a-barrel oil and a big problem with dependence on foreign oil sources, Congress won’t act to approve drilling on the North slope of Alaska, much less many areas of the continental shelf.

You can agree or disagree with this, but it clearly shows that society has many interests — including environmental interests — and that getting the cheapest oil possible is not necessarily the top priority.

Now if the citizenry takes that view toward a vital commodity such as oil, think about what they would think about environmental standards related to growing fresh produce!

Sustainability and corporate social responsibility touch many areas. As we warned in this column in Pundit sister publication, PRODUCE BUSINESS, there are real vulnerabilities for the industry when it comes to labor issues.

Yet seeking success for the industry in economic, social and environmental terms is important… and difficult. Although food safety is part of these issues — after all, it is neither sustainable nor socially responsible to kill or sicken our customers — food safety creates unanimity of opinion that is harder to get on environmental and social matters.

Indeed, it is not clear if Tim’s proposal is feasible. Can the industry come to consensus on issues such as Fair Trade, environmental standards and labor issues? Maybe not. But we haven’t done that on food safety either. We might, however, come together on some baseline standards, recognizing that individual companies may choose to demand different criteria.

A lot of what has been written on sustainability and social responsibility is unrealistic. Properly understood, the movement is a recognition that the way the world functions has changed:

This being the case, we think following up on Tim’s thought is wise for the industry. But we have a lot of background work to do in defining our terms, understanding the problems and knowing how other industries are dealing with this issue.

In order to help the industry focus on this issue, the Pundit and its sister publications are going to sponsor an industry conference on sustainability and social responsibility.

We are working on it now, and will announce specific information soon. If you or your organization would be interested in working with us as a speaker, a member of the steering committee, a sponsor or otherwise being involved, please send us an e-mail here.

We are looking forward to working together to help the industry address this important issue and we thank Tim York and Markon Cooperative for posing such an important and thoughtful question on such a crucial industry issue.